“Each positive thought is your refuge and your sanctuary, where in that thoughtful moment, you are safe.”
– Bryant McGill

City of Sanctuary Sheffield aims to create a culture of welcome for asylum seekers and
refugees, who can be among the most isolated and excluded people in Sheffield. 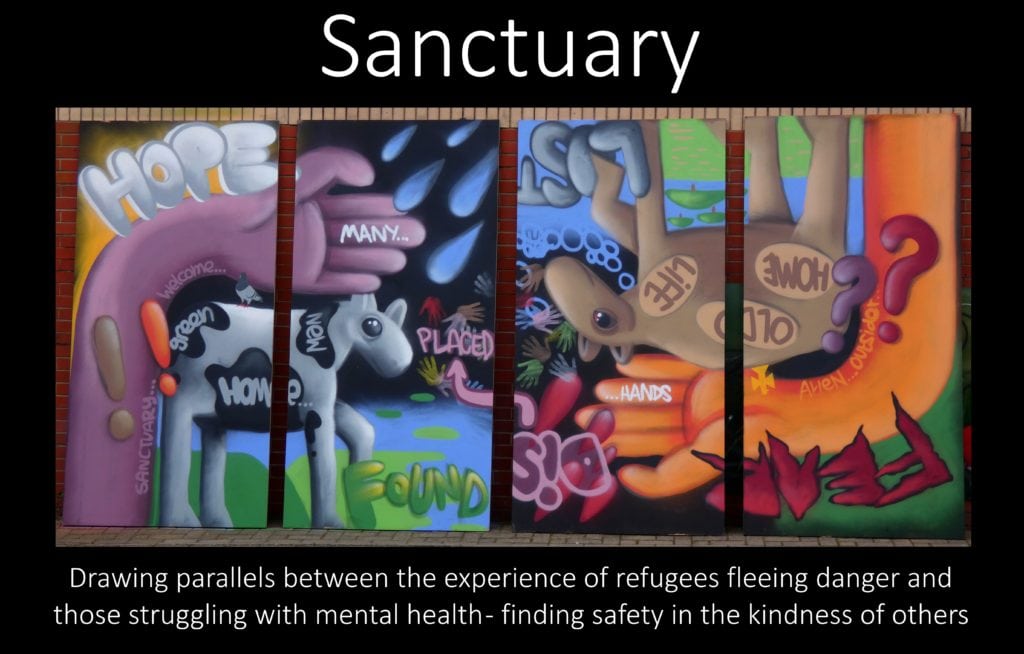 “Sanctuary” was created by John Dowswell in June 2018 for City of Sanctuary Sheffield, with support from the Rainbow Heron Small Grants Fund.
The work can be seen outside The Art House, Backfields.
Watch the video of John creating the artwork over two days (video created by Fiona Milne)

Annie Anthony Mayes reports on the development of the project through workshops with local artists and young refugees:

“The project started on March 16th this year and was completed on June 29th 2018. A number of workshops at the City of Sanctuary and in Conversation Clubs were carried out and local volunteer artists including John Wilsher, Matt Smith and Kalindi shared their experiences with lots of refugees, asylum seekers, migrants and people suffering from mental health issues. It started as a small group with 4 people to begin with and ended with 17 participants towards the end of the project. The group also included young unaccompanied refugees who initially came with their project worker from Chilypep.*

It was very interesting to see the project develop with laughter, chatting, sharing of ideas and life stories as people developed more confidence and got to know each other better.

The common theme was how people were made welcome in this country, in our city – Sheffield being seen as a relatively friendly and safe place to be. Some people felt they were like ‘aliens’ when they first came here, finding it hard to fit in but as they got to know people and felt accepted they settled more into being here. People loved drawing hands as a form of ‘Unification’ and ‘Togetherness’ as we put all the pictures together. Also they liked drawing animals, especially cows, dogs, camels and horses.

As many refugees come from rural areas, they were happy to find cows here in South Yorkshire as well. Various subjects were common to all, such as Fear, Lost, Found, Family, Hope, Home. Also activities such as learning English, going to courses, making friends, not feeling alone and becoming happier. Sharing food and drink, and simply being listened to, were also very important in the art workshop. Discussion of various artists of various countries, poetry, music, songs and languages, took place amongst us. Finally I must admit I did not want to end the workshop and hope to carry on in September.

I have collected various contacts and details of other volunteers who would like to get involved for future art workshops. There is a high demand for workshops such as these. There are choir, dance and yoga workshops also starting in September at the City of Sanctuary Sheffield centre this year and I hope to work with them as well.”

*Chilypep partners City of Sanctuary Sheffield and other organisations in the Respect Understanding and Building Inclusive Communities project http://www.chilypep.org.uk/rubic 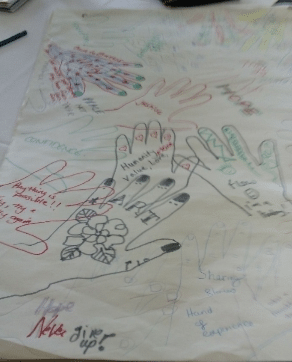 In their original grant proposal, City of Sanctuary Sheffield noted that:

“We recognise that young asylum seekers and refugees are at increased risk of mental illness, because of the difficulties and uncertainties caused by the process of seeking asylum, as well as the trauma they may have experienced in their home country and on their journey to the UK. We also recognise that many young people who have grown up in Sheffield face mental health challenges, uncertainty and the impact of trauma. By bringing young people together on equal terms, to work on a joint creative project, we believe that we can promote mental wellbeing in the participants.

There is some evidence for the effectiveness of this kind of community psychological intervention with children and young people who are refugees and asylum seekers: See School and Community-Based Interventions for Refugee and Asylum Seeking Children: A Systematic Review by Rebecca A. Tyrer and Mina Fazel
Published: February 24, 2014
https://doi.org/10.1371/journal.pone.0089359” 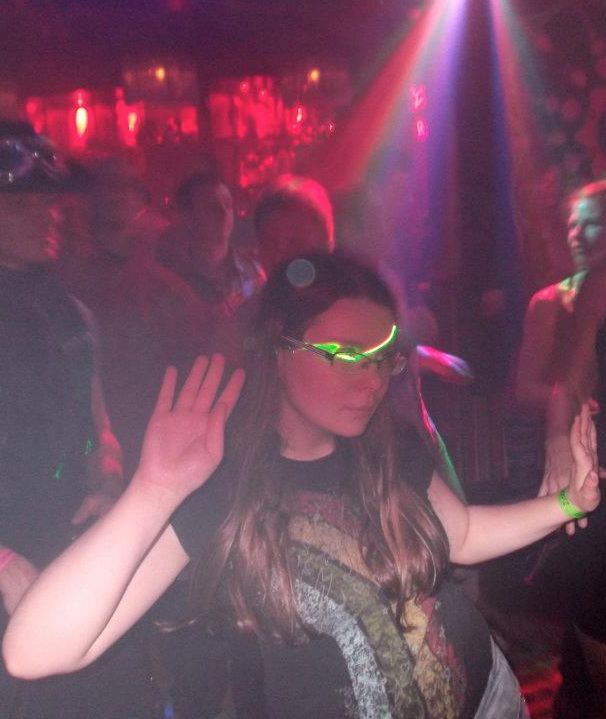 That's the badger. 45 minute fumble in the overgrown undergrowth with the inimitable John P Walker on photo duty.

Apologies to @ernestzacharevic just working with what i find…

We dem boys. Otter on croc collabo with man like @eugenebooms from a sunny weekend in big smoke a few weeks back. Cheers to @bablu121 for the hook up and @ugz for the flick